Wanna give your mutt some teeth? This is the place.

Car show time is fast approaching and with that in mind, I am always looking for ways to improve the showing of my M151A2. The street rod guys hang curbside service trays on their cars with faux food, the ever-present Rat Fink stuff, old road maps and all sorts. We MV guys go straight to guns and associated armament. The problem with the M151 is it has been around FOREVER and so, there is a whole array of weaponry to choose from, spanning half a century or more and depending upon what time period you are representing, one 'gun' is not necessarily as good as another.

I have an M14 which is a spring-air gun I converted to appear far more real than when I got it. The problem with that 'gun' is, being as it is fully constructed of plastic, it is essentially a model and it does require some delicate handling. But, with my makeover, carefully displayed and from only 2 feet away it is very convincing and you'd swear it was the real deal.

Later, when I got a bargain on a rather war-weary M16A2 rubber ducky training gun (with real hardware) I grabbed it. That 'gun' required some massaging to make it appear more real, and being a firm believer in the value of a bargain combined with sweat equity, I worked my magic and came away with a very good, very hardy replica. The only trouble with it is the paint is in almost constant in need of touch up.

Of late, I had a couple of Benjamin Franklins to dispose of and came across what was, by all appearances a rather good, all-metal replica of a M16A1 made in Spain and sold by one of the popular purveyors of antique and replica militaria. So, with the car show only two weeks away, I bought it and at this point, I am still on the fence about whether I should have bought it or not. The "metal" is a zinc alloy and that means that some liberties were taken (such as the width of the guards for the front sight post) in order to make it less prone to breakage. That zinc alloy is then coated with a tinted clear finish that, unfortunately, will never be mistaken for anodizing or parkerizing. So, without further ado, I present to you a product review; the good, the bad and the ugly of my latest acquisition - The Spanish-made M16A1 replica.

(The Good) - This views very well and from about 4 feet the average person might mistake it for a real weapon..... 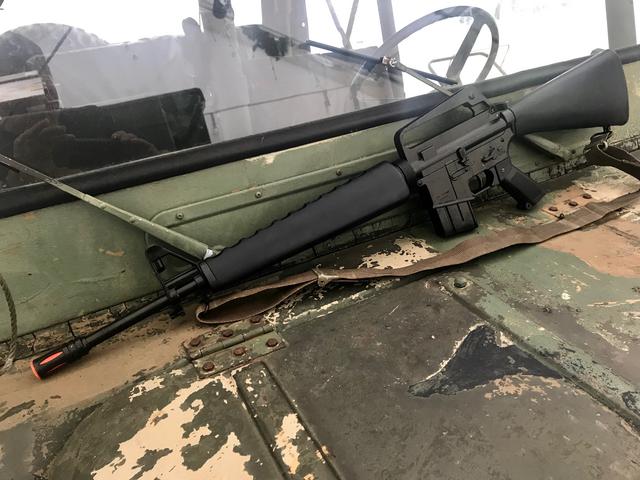 (The Bad) - ....except for that bloody awful orange plug. Well, there's no telling what's under it and since some people need reassurance, I'll just leave it alone. Sadly, zinc alloy is brittle and I guess hoping for an early flash suppressor was out of the question. 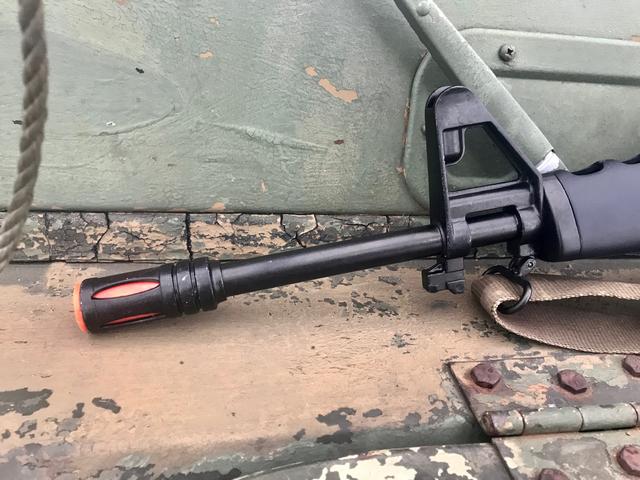 (The Ugly) - The hardware for the sling (front and rear) is cheap and is actually smaller in diameter than the real loop! I wouldn't put any faith in it holding up. Luckily, the only thing I'm asking this thing to do is sit there and look pretty. 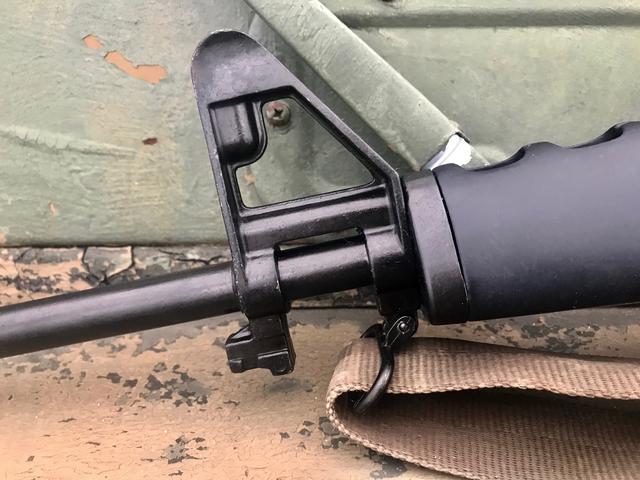 (The Good & Bad) - The receiver would make a believer out of the average person but then, whaaaaaaat?!....there's that ridiculous tell-tale screw in the grip. 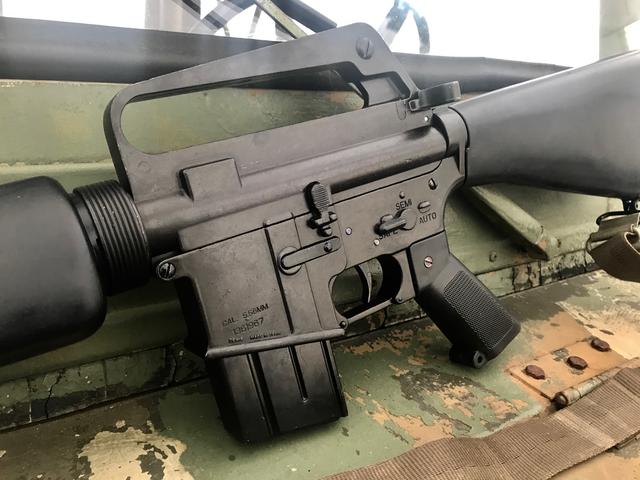 (The Good) - This butt plate is very convincing and no, the little trap door doesn't work. Not that it matters, because no one needs a cleaning kit for a replica gun. 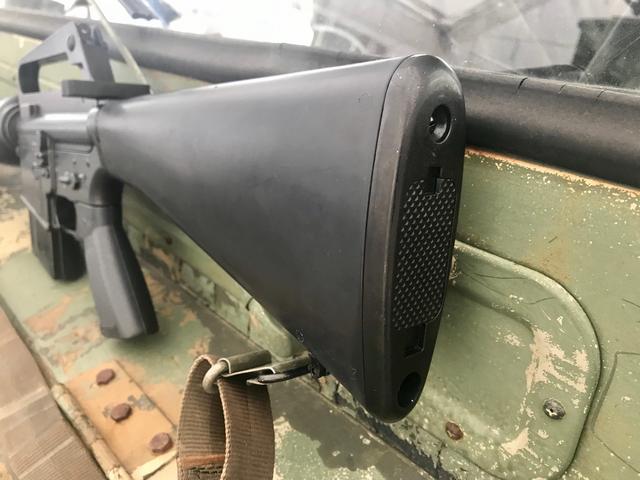 (The Bad) - The charging handle actually works to cock the trigger mechanism which also goes click. I guess some people think that's important but I doubt I'll ever use it or let anyone else use it...for fear of breaking the charging handle which is also made of (you guessed it!) zinc alloy! Stock is a bit oversized and absolutely will not fit in the standard cups for the vehicle mounts. Not a deal breaker, but rather disappointing if you ask me. 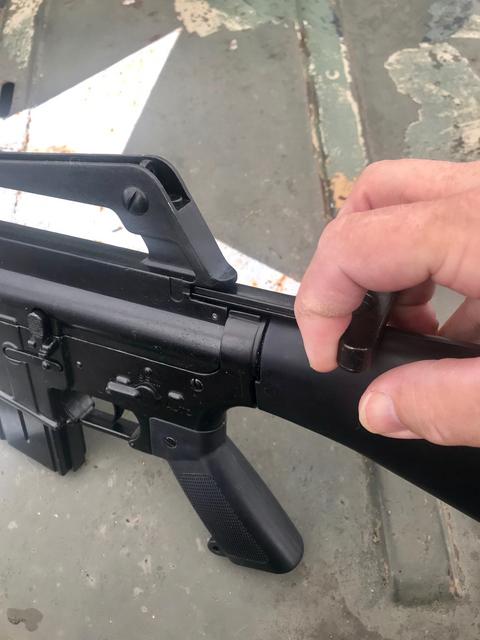 (The Good & The Ugly) - They've done a pretty good job on details such as the selector switch which looks like it would move but doesn't because it's actually part of the casting. The problem with this is, any high point on the casting is losing the color coating and it's losing it quickly in what little handling I've done with this over the few days I've had it. In short, the finish isn't very hardy at all. Is that screw in the grip bothering you yet? 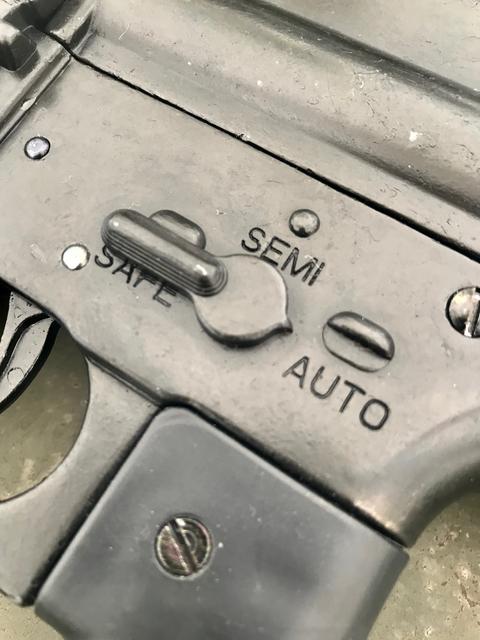 (The Good) - Even the bolt release looks convincing. It too is part of the casting. 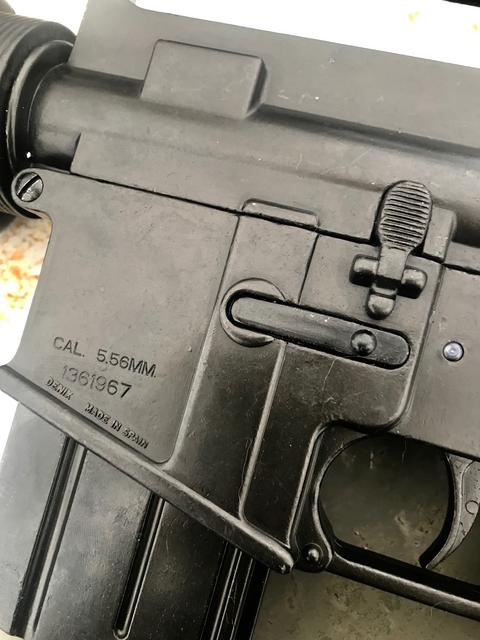 (The Good & The Ugly) - Once again, the details are good. The rear sight adjuster and the ring sight are castings and are not adjustable but Ohhhhh...that finish is going to degrade rather badly. Disappointing. 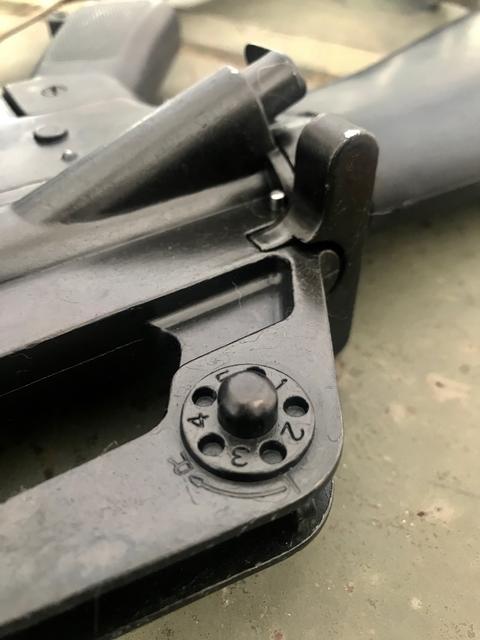 (The Good & The Ugly) - More of the same. The magazine release does actually work on this and the mag drops like a stone but, drop this magazine on concrete the results will not be pretty. The bolt cover does not function and is always closed. Forward assist is just eye candy. Yep. The grip has a screw on both sides. 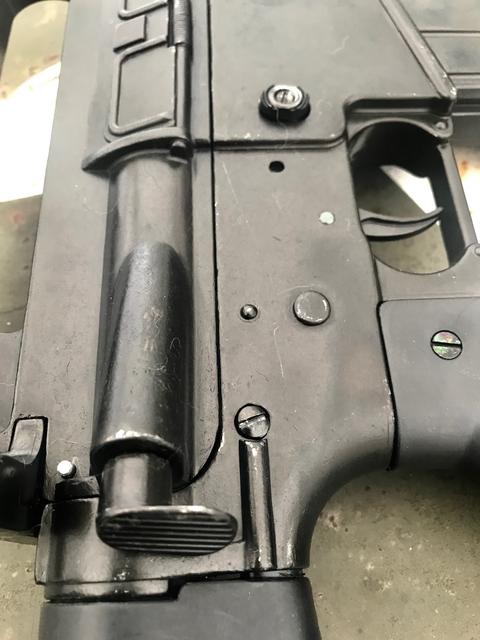 (The Ugly) - This magazine is the wrong finish for one thing and it just screams, fake, Fake FAKE! 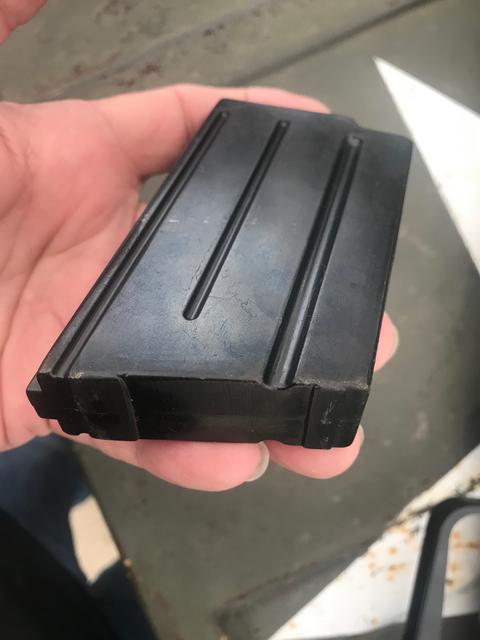 (The Ugly) - See the insert meant to look like a follower? It's just an interference fit. It fell out. I pressed it back in. I'm rather sure it will fall out again. Makes me wonder why they bothered. By the way, this whole thing will not accept any real parts (other than a sling, of course) so - no bayonet, no real magazine, no real furniture, no real flash hider and no M203 grenade launcher. Oh well. This is what you get for $200. 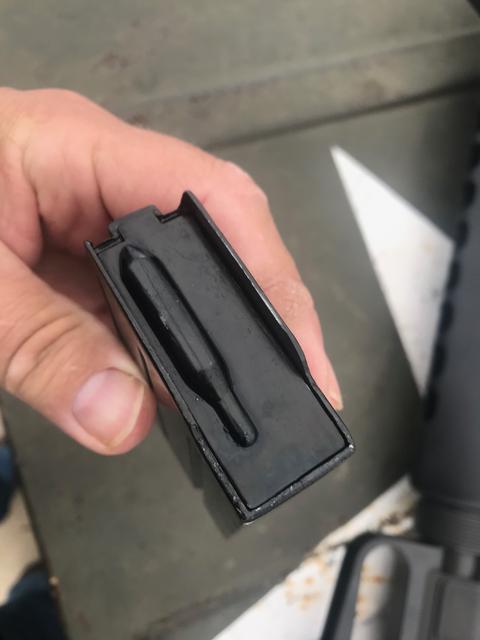 (The Good) - This fills up the rack nicely and the forward triangular stock is robust enough to withstand the pressure of the catch. If I find I can't stand the orange tip, I'll just hang a cap or a towel on it. 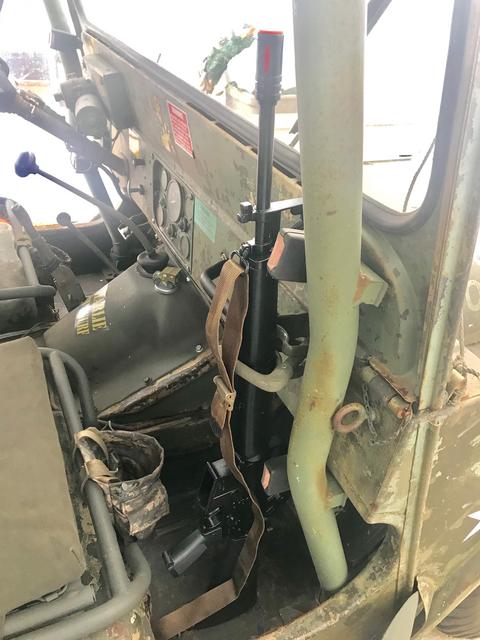 So that's a wrap. The biggest drawback on this is that the finish is not only incorrect but it is not hardy enough to be maintenance free. Was it worth the money? For lack of other options beyond a high end Airsoft which would easily cost twice as much I would have to say....Maybe. 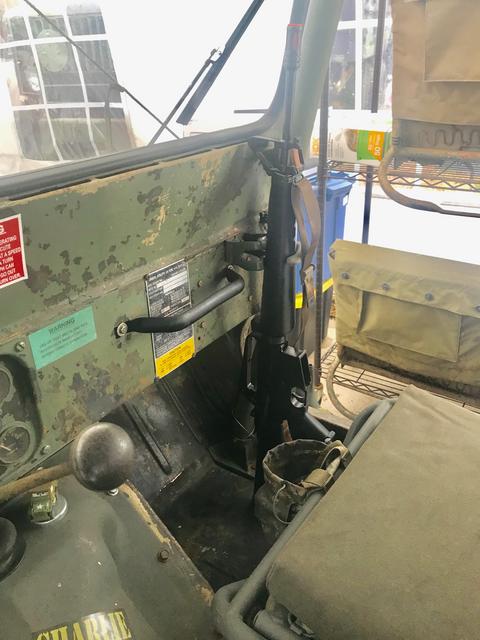 I have a LOT of Airsoft guns. But as I mentioned, when you get down into the lower price ranges, and by that I mean of a similar in price to what I paid for this, (and particularly the spring-air versions which are far less expensive than that) they're simply not constructed very well. You might get away with it up north, but clamp them up in a gun rack on a hot Texas day and see what happens. Not good. Not good at all.
Top

It has a plastic look to it.I can't explain that, it just don't look right
mark

I thought everyone in the USA had at least one genuine M16, amongst a variety of other weapons...?

As for the plastic look...yeah. That coating on the zinc alloy is rather disappointing. Eventually I will have to paint this thing but for the moment, I think it's suitable for a car show.

The point of this posting is to allow the rest of you a far better look at this than I had before I bought it and so, if any of you are in the market you'll be far better informed.

If there are any pictures I can take that would help with modding it to look a little more realistic, just let me know.
Raymond

kmam wrote:I thought everyone in the USA had at least one genuine M16, amongst a variety of other weapons...?

Why yes, I do have "one genuine M16, amongst a variety of other weapons" including a full auto Fabrique National FNC.

If you ever make it the central U.S. and wouldn't mind a detour to beautiful sunny Clarksville Mo, let me know and we can shoot some of them

Firing one will certainly put a smile on your face

May take you up on that but you know I've already sold my soul to rock-n-roll.

2008 with me on the right; one of those much-hated contract killers let loose on an unsuspecting Afghan public. (we weren't all that bad....really!) Just a few pounds and many gray hairs ago. We didn't get much decent food to eat and I came home looking like a scarecrow. 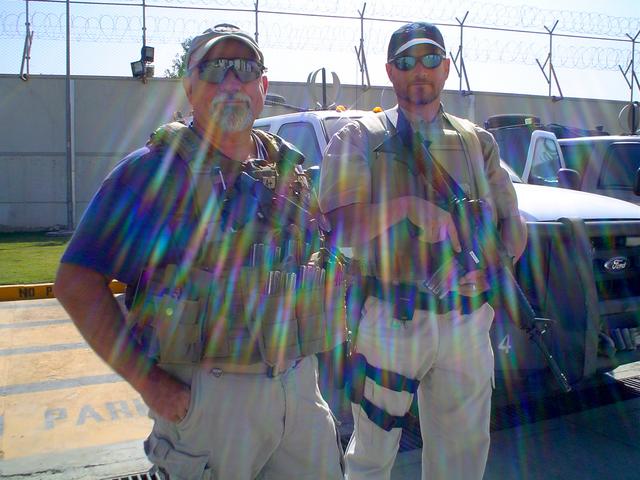 Let me introduce you to MY little friends! 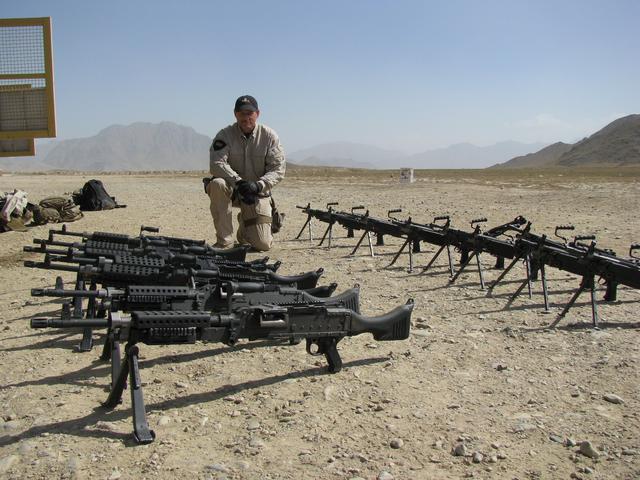 Brought this guy home from the Afghanistan. First pattern British .303 (black powder round) and all markings in Farsi and one more for its service in the Afghan National Army. 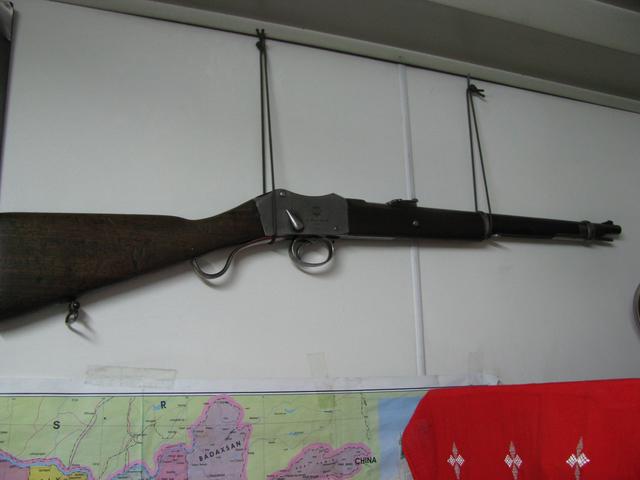 I knew you'd get a kick out of that second photo!

By the way, I loved my issued M4. What a sweet little ride.
Top

Not a gun guy, but purchased two of the Denix M16A1 replicas that I believe are the ones that the OP purchased as well. We'll pull the orange plugs out and mount on drivers sied and passenger side of the MUTT. As we all know, the guns get the most attention at shows and events, so might as well make it looks as accurate as possible.

As this seems to be a popular accessory for the jeeps, if someone who knows more about these has some options to make them look more accurate, perhaps several members could benefit.

My son is a combat shooter and knows his way around a gun, so if we had some direction as to what to replace or modify on this Denix, we will be glad to do so and provide before and after pics. I have a Denix Thompson on my GPW and am happy with it. The A1's were on sale for 40 percent off, so they were $144 each and we could pick them up and not pay shipping, so we felt a good value.
We went with the A1 over the A2 so that the shorter magazine would not stick out into the door openings on the MUTT. But it still looks like they will be fun to climb around to get in and out. We have not installed our mounts yet on the jeep.
Top

I had a dummy M14, M16, have a gun rack in the A2, the cops didn't want me driving around with it, which is understandable as with these shootings happening, I would be highly suspect.Well, it is legal to have a real gun(think back to high school days had shotguns in the rear window, to go pheasant hunting after school).But when you're out in the sticks, it would be handy to have.
mark